Personally, I would love to see fireworks banned from sale to the general public, and public displays limited to silent fireworks, but since they aren’t follow these tips to try and keep your dog safe and happy whilst people are having their firework displays.

If you want to enjoy the fireworks – please attend an officially organised display. But please don’t leave your hound home alone, if you can’t find someone to pupsit – then don’t go.

If you choose to organise your own display, please let your neighbours know in advance, choose quieter fireworks, and limit your display to 30 minutes maximum. Remember about your own dog, and think about how they may feel with fireworks going off so close to home. Try and keep them in a room furthest away from the noise, and leave the radio or TV playing to try and drown out any sounds from outside.

Dogs Trust has some simple advice to help make the firework season less stressful for dogs: 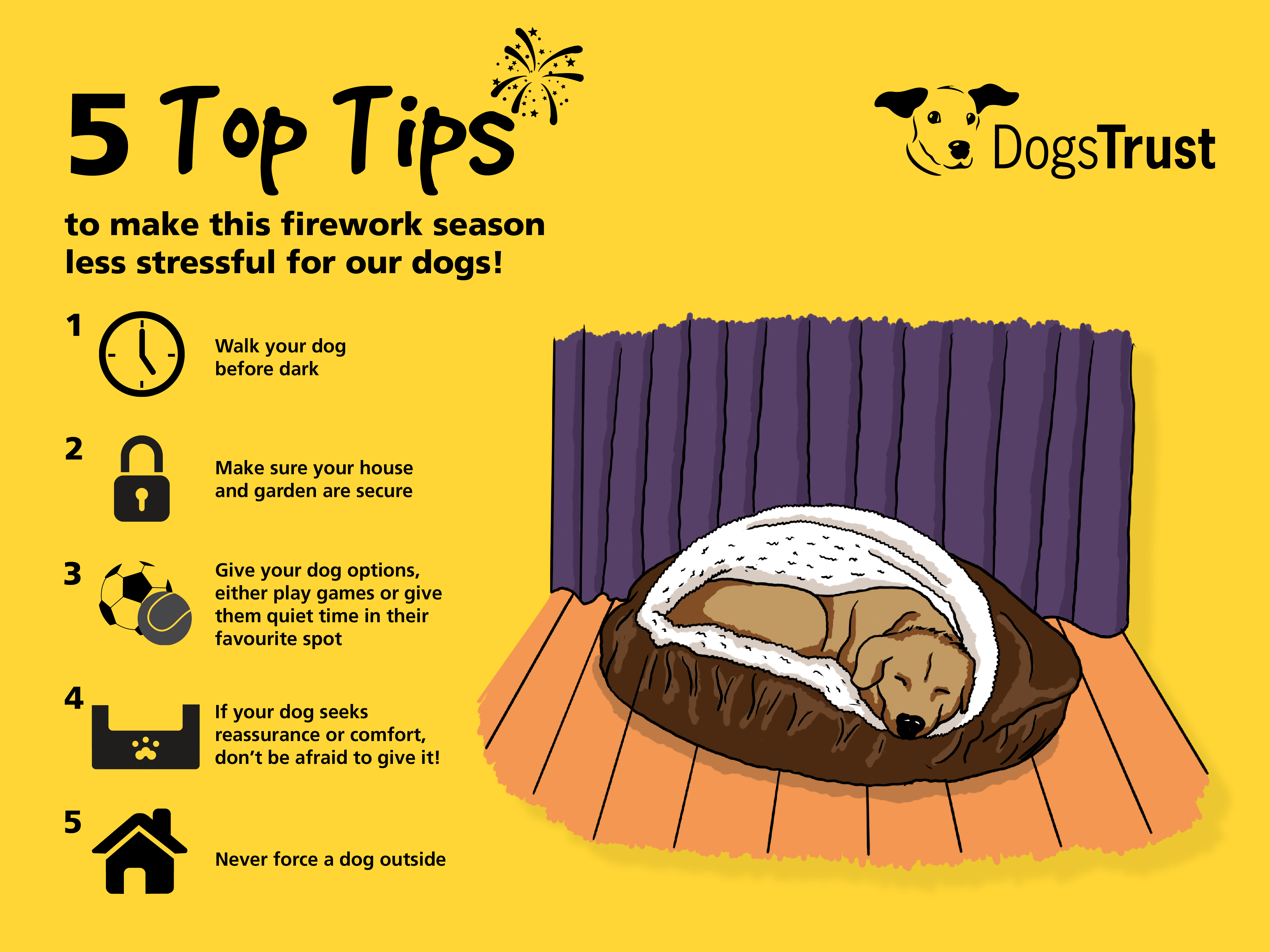 Before the fireworks begin:

If you think that your dog gets worried by loud noises, contact your vet to see if there’s an underlying health problem first, and to help you find a qualified behaviourist. Your vet will also be able to discuss whether medication might be helpful.

Programmes of behaviour therapy recommended will vary for each dog, but may include the following elements:

I saw the following on Facebook and it was so apt I thought I would share it here. It was originally posted by Bob McMillan and if you like his writings you can find more of them over on his blog, The Wild Stare. I’ve added some photos by Anne-Birgitte Larsen which beautifully demonstrate the majestic and mysterious nature of these wonderful hounds.

The Inner Wolfhound Needs You Too
Originally posted by Bob McMillan

It’s one of the many things that respected breeders agonize over when choosing homes for their puppies. It’s a question they may never directly ask you. But you can be sure they’re reading between the lines of all your answers:

Can you meet a wolfhound’s inner needs, too? Do you have the compassion, patience and heart to nurture the soul of the Irish wolfhound?

It’s no trivial matter. The Irish wolfhound is a companion unlike any you’ll ever have. This has been the conclusion of people who’ve written about the wolfhound for as long as there’s been writing.

The Long View of the Irish Wolfhound

I recently came across a rare book, Edmund Hogan’s “History of the Irish wolfhound,” which was published in 1897 and was almost immediately lost to a fire at the publishing house. It was reprinted in 1933 and is a treasure of insights into the breed down through history.

Hogan, a Jesuit scholar, collected every written reference to the wolfhound from antiquity through the end of the 1800s when the breed had just been brought back from extinction. There’s a thread that runs through the milennia. It’s something observed again and again by kings and commoners, Imperial Romans, Viking princes, Irish heroes and people across Europe over the centuries: The Irish wolfhound is practically human.

Here is a hound who was once the terror of the battlefield. They pulled knights from saddles and brought chariots crashing to the ground. They were formidable hunters, able to outrun and overpower wild wolves and shake them to death with their powerful jaws. They’re a creature out of myth and legend. Yet, here’s a strange thing. Writers from antiquity on marveled that such a savage giant could in the flash of an eye turn “gentle as a lamb” under the touch of their human. In the home and the castle, they were a quiet, dignified, almost docile presence.

What Too Many Miss

The first thing — and often the only thing — people see looking at an Irish wolfhound is its staggering size. They should think bigger. They’re missing the most precious part of the wolfhound — his wit, intelligence, loving heart and tremendous, quirky personality.

Like no other dog I’ve ever known, wolfhounds talk to you. They insist on engaging you with a deep, expressive gaze. “Old souls” is how many wolfhound owners describe them. If a breeder trusts you to take one home, forget the word “pet.” This is the start of an intense, incredibly rich relationship.

First and foremost, a wolfhound wants to be with you. You’re his human. He’ll treat you as an equal. In time, you’ll understand that this is an honor.

A good breeder will want to know if you’ll include your furry companion in family activities and outings or frequently leave her in a kennel or X-pen for convenience. A wolfhound won’t strike you as needy. They’re stately and unflappable. But keep them apart from their family and watch them sag.

Most dogs study their humans. Wolfhounds will watch you and stick beside you so closely that they’ll know what you’re about to do before you do. Will you watch them as faithfully? There’s a tipping point as they mature where one day you’ll know their moods and quirks as well as you do your best friend’s. Because they’ve probably become your best friend. The bond is intense — if you let them in.

The Patience of a Saint

Young wolfhounds have a wild side. All puppies do. All puppies aren’t 100 pounds at six months. Restraining them, keeping them from getting hurt or ransacking your house can be trying. But you’re dealing with a baby, no matter how big he or she is. Can you be patient and loving while you peel them off the ceiling for the fifth time tonight? They may come at you with the enthusiasm of a cavalry charge, but a harsh word can cow them. Keep it tender and loving.

That applies to training, too. You’ll need to set boundaries. But do it kindly, with firmness. Juvenile wolfhounds, like human teenagers, will test you. Adults will develop selective hearings when you spout commands. If it doesn’t make sense to them, they may ignore you. Stay firm, but treat them tenderly…

….because these are hounds who’ll fight for you and, if need be, die for you. You are their world. It’s a level of love and devotion we don’t see much anymore and it’s a humbling thing.

Was it really just happenstance?

A wolfhound is a lodestone. You may have thought you were getting just another dog, but they’ll cast a giant shadow over your days. You’ll find yourself doing things or avoiding things because of their primal sense of ethics. You’ll come to love them with a selfless love and never want to let them down. Through them, you’ll find your True North.

As a wolfhound comes into your life — and then one day leaves — these are the things that make wolfhound people shake their heads and reflect on. They realize their lives have been changed by these incredible, unlikely friends. In hindsight, we wonder, could this have been just a random encounter? It’s ironic that “an animal” makes us think of higher things. Or maybe not…

They leave that kind of mark on our lives. And I believe it’s up to us to embrace the soul of the Irish wolfhound and help them, too. Help them fit into our crazy human world. Help them be the best wolfhound they can be. Help them with all our love and respect. Just as they’ve helped us.

Today is hound day at Midland Counties Championship show held at Staffordshire County Showground, ST18 0BD. Irish Wolfhounds are not a CC breed at this show, and are being judged by Ann Macaulay of the famous Scottish kennel, Gartlove.

If you are heading along today, we wish our members and their hounds all the very best of luck, but remember no matter what the judge thinks, you always bring the best dog home! 🙂

Ann has drawn an entry of 26 wolfhounds, which is pretty good for a champ show with no tickets.

Results will be posted as the day progresses, and can be seen on the Fosse Data website.

Last time Ann judged a championship show was at Scottish Kennel Club in August of 2012, Irish Wolfhounds do not have CC status at this show either. At that show Ann drew an entry of 17 and with only 1 absentee, found her BD in Achnacon Druid’s Apprentice at Stenhound, RBD was Marlaw Dubh Mac Tire, BB and BOB was Rivenhound Double Cream and RBB was Hibeck Hannah at Rivenhound. BPiB was not awarded as there were no puppies attending.

Last year at Midland Counties John Sumner (Ballyphelan) drew an incredible entry of 33 and his top winning dogs were:

Entry and absentee numbers at Midland Counties Champ show for Irish Wolfhounds (with no tickets) over the last 5 years are:

Today sees the annual Irish Wolfhound of the Year competition.

To qualify for entry the wolfhound must have acheived a certain win or placing at a Championship show throughout the year. Full details of qualifying criteria can be seen on the WOTY 2018 facebook page.

We’re very proud that several of our members hounds qualified and we wish them every success on the day. Go IWCoS!!

The Irish Wolfhound Club is providing us all a great service in publishing the results live as they happen. Thank you IWC from all the stay at home observers. 🙂

What glorious sunshine we had today!

A lovely day was had by all I think at Hound Association of Scotland Open show. The Irish Wolfhound Club of Scotland had sponsored the classes, and suggested Mandy Addington, affix Wolvebrigg, as the judge.

Mandy made the long trek up from Essex to judge four classes of wolfhounds with an entry of 12. Three wolfhounds were sadly absent, but Mandy had some lovely hounds to go over. She found her Best of Breed in Steven Ritchie’s Thor, Broughadowey Raiden at Torrfionn. Best Puppy in breed was Alison Wiseman’s Dolly, Hazianne Partial Eclipse. Congratulations to IWCoS club members Steven and Alison 🙂

After judging was complete and everyone could relax (well, nearly everyone) we headed outside to put up chairs and roll out dog beds for a picnic in the sunshine (in Scotland, in October!!) while we waited to cheer Thor and Dolly on in BIS and BPIS.

The European Dog Show is being held in Poland just now alongside the 80th Anniversary show of the Polish Kennel Club.

Sighthound (Group 10 under the FCI system) day was yesterday and you can find the full Irish Wolfhound results here.

Best of Breed from  38 entries at the EDS was Glor Na Gael Dyfan, bred in Hungary by Czilla and Timor Juhasz.

At the Polish KC show on Thursday Best of Breed Irish Wolfhound was given to Sapwoods After All from 7 entries. Full results here.

Congratulations to all who attended.

You can sign up on their website to receive the Newsletter directly into your email inbox each time it’s published.

Also, check out the website – whether you are an experienced owner with many years under your belt or never owned a wolfhound and just doing your research because you’re interested in getting a puppy, there is plenty of information there for you.